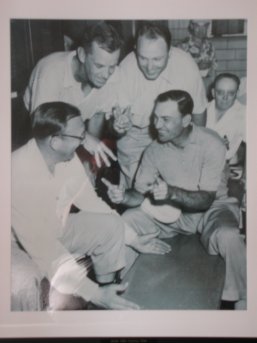 On April 20, 1920, a group of businessmen and South Hills residents, under the enthusiastic leadership of Mr. C.L. Cooke, called a meeting in the Old Chatham Hotel, downtown Pittsburgh, to present objectives of organizing and developing a Country Club for the South Hills area on 78 acres of land lying Southerly at the intersection of Route 51 and Brownsville Road. At a meeting called on April 23, 1920 it was decided that the new Club would be called “South Hills Country Club” and the membership would be limited to 230 members with all those joining before May 1, 1920 considered Charter Members.

At the next meeting held May 6, 1920 at the Brentwood Municipal Building it was announced that 207 applications had been received. It was decided that the Initiation Fee for Charter Members would be $100.00 plus War Tax. Ground-Breaking ceremonies were held June 12, 1920.

On November 8, 1920, it was decided to increase the membership to 350 active members and 50 life members.

The golf course itself had been laid out and started early in the year of 1919; a rough layout without a name but played by a few that had the privilege before South Hills Country Club was organized and registered in 1920. Opening day of the golf course was May 10, 1920. It was played as a 9-hole golf course from 1920 through 1923. On May 1, 1924, it became a full-fledged 18 hole course.

In June 1938 disaster struck in the form of a fire. By October 1938 a contract was placed for rebuilding the Club. The Club was closed and all help dismissed from November 1938 until the formal reopening in April 1939.

Due to gasoline rationing during the war, the Clubhouse was closed from December 1, 1942 until March 31, 1943.

In 1944 the idea of a yearbook was adopted, known as the South Hills Country Club Roster to this day.

In 1956 a beautiful Swimming Pool was added to the Country Club complex.

A complete renovation of our swimming pool facility was completed in May of 2004.

South Hills now has one of the finest swimming complexes for our members to enjoy of any club in the area.

The lower level dining areas of the Clubhouse were renovated during 2009 updating our Mixed Grille Room to the Tavern on the Tee! The Tavern opens onto a beautifully landscaped patio which is also used for casual dining.

In 2012 the Main Floor of the Club went through extensive renovation updates. The entrance was expanded to be more inviting and have a chic modern feel. The Ballroom was updated with state-of-the-art technology, but has kept its tasteful elegance. The Lounge went through a transformation making it a sophisticated yet warm and intimate space. The focal point is a dramatic stone fireplace that is set off by the magnificent windows and stunning wood accents. The Dining Room’s rich warm colors and graceful draperies add a refined style to the attractive space.